The Living Mall has been closed down as of December 1, 2019. The site will be demolished and an office complex will be built on the site. Read about it here.

Built in 2001, the Living Mall in Taipei City is a large and strange edifice that looks like a traditional department store with a giant orb in the center.

Directions to the Living Mall:

Take the MRT to Sun Yat-sen Memorial Hall Station and then walk north. You will approach an overpass of the railways’ tracks. Turn right and keep walking along the tracks. You’ll soon see the Living Mall in front of you. Can’t miss it.

Upon entering the building, also called The Pacific Core, visitors may think nothing unordinary about the shopping center.

However, once inside, visitors will notice the circular design of the department store as well as a large round orb placed at its center.

I visited the store on a weekday and felt it to be very empty. There were many small stalls on the main floors with a few of the bigger chain stores.

There is also a Cinemark movie theater in the mall as well.

Around the “edges” of the mall are many small restaurants and pubs. The pubs don’t open until the evening. So, it’s possible there are more people around at night.

The 11th floor is now home to the famous drinks and music bar China Pa. The 12th floor has several clubs including MUSE.

Visitors can actually go into the orb. There is a large childrens’ world with a fish theme. Toys R Us is also there.

A view of the inside of the orb.

Low and behold, the bottom level has an actual ice rink!!!!

It looks like ice hockey is played and visitors are able to skate.

However, the rink has several pillars straight down the middle of the ice. A challenge for hockey players.

All in all, Core Pacific City may not have great shopping, but it’s worth a walk through to see its strange design. Also, the night clubs and movie theater are worth a visit.

A view of the Living Mall from a block away. 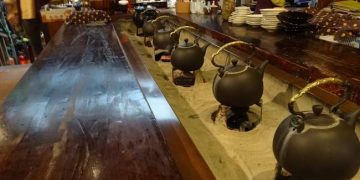 Betelnut – The Culture of Betelnut in Taiwan